Hey, Rox Here. I love the Hunger Games and here is my page on it. I love love love it. My favorite books and movies ever. Its just a spot for Hunger Games Fans. If you have an instagram, please give this page a shoutout and hashtag it #roxshungergames101. Get your Hunger Games homies hooked up to this site. Enjoy!
Want More? Check out our new site!!!!
Check it out 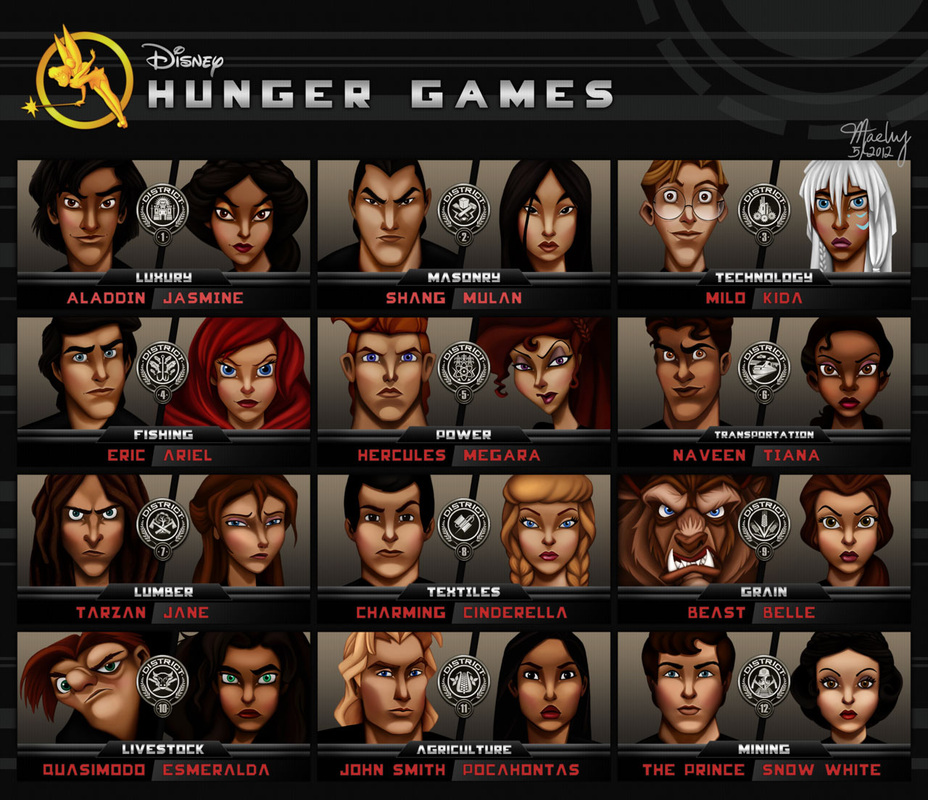 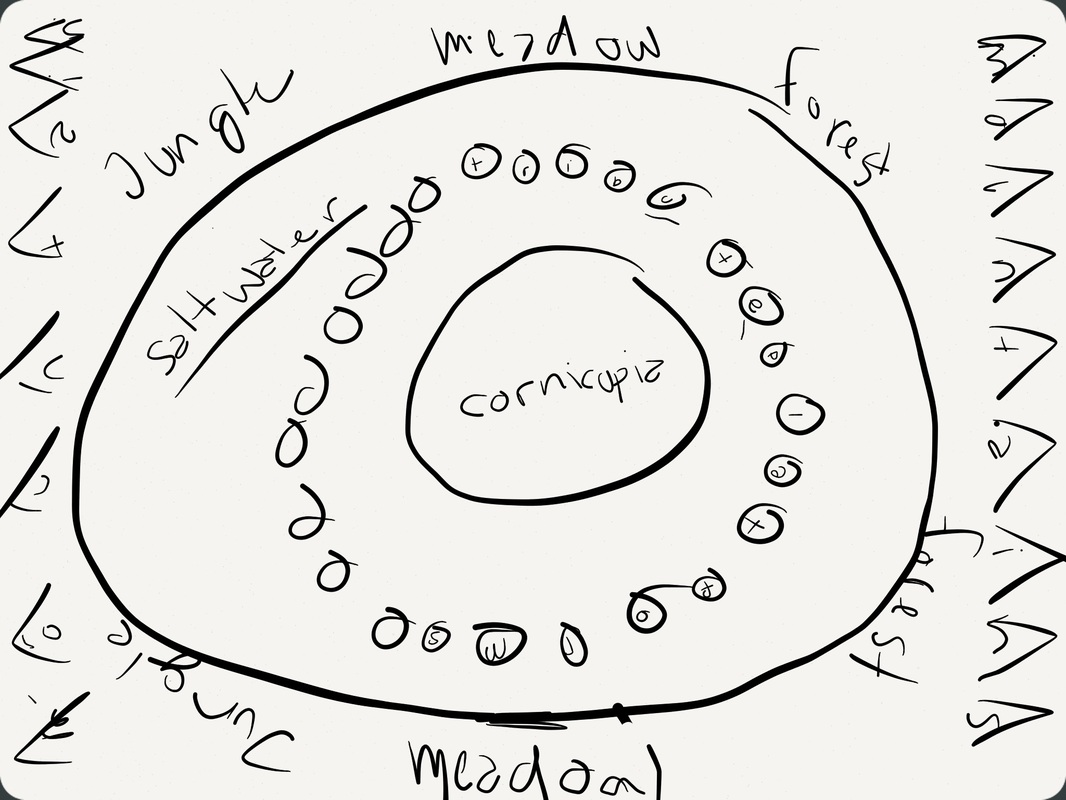 The results:Shang, Mulan Hercules,John Smith, Pochantas, and beast form a career group even though they're not the usual districts, because they're the ones who've had the most fighting experience (Shang and Mulan basically saved all of china, Hercules is basically a god, John smith had some experience I guess idk, Pocahontas was a member of a Native American tribe so she probably has a lot of experience hunting, and beast is um, beasty.) Cinderella dies first, killed by Mulan. Snow White dies next, killed by Pocahontas, sorry.there's water so Ariel excels (duh). Belle uses her smarts and is allies with Tarzan, Jane, tiana, and naveen. The other princes, (the prince, charming, and Eric) team up too with Ariel. Idk about milo and kida i don't even know what movie they're from but milo dies right away, overpowered by shang, Hercules, and the beast. Esmeralda leaves Quasimodo to die and is a loner, eventually teaming up with jasmine, Megara, and kida (empowered females, yay!) Aladdin and Quasimodo try to stay alive, but I think Quasimodo loses the will to live because Esmeralda abandoned him and dies of dehydration.
So who's left? charming and "the prince" (poor nameless people) are hunted down by the careers and be outnumbered and die, (the beast and John Smith kill them) however I think Ariel and Eric are able to slip away, but Eric is grievously injured by Shang and dies, then Ariel joins kida, jasmine, Megara, Esmeralda, who would have died of starvation but luckily got sponsored at the last minute, then jasmine and Esmeralda learn how to hunt the fish (I'm imagining a saltwater filled arena) and Ariel gets over her inability to eat seafood.
So here's what it looks like now: 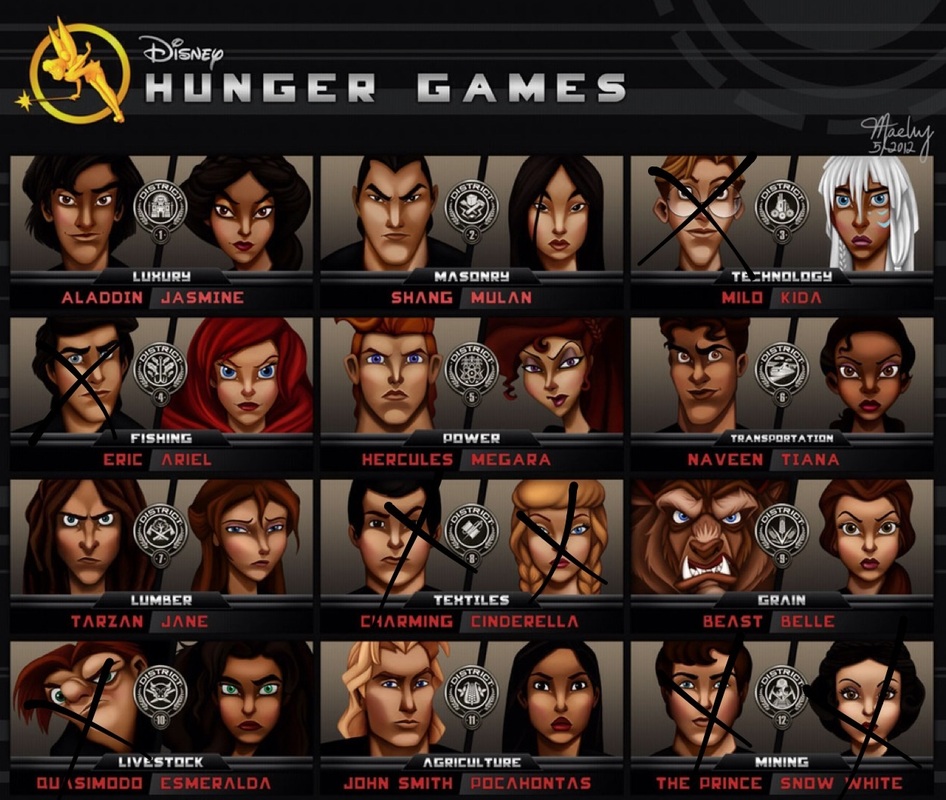 Now I think the female group (kida, jasmine, Esmeralda, Megara and Ariel) eventually come across Aladdin, having been jumped on by the career group, grievously injured by Hercules, dying. There is a heartbreaking scene, in which jasmine holds his hand and wishes that she never left him. It's veryveryveryveryveryveryveryvery sad, but the Capitol thinks it's sweet, so the female group get sponsored.
Now, the career group has been hunting down the female group and eventually catches up to them. Kida dies, killed by John smith, but luckily Ariel jumps into the water with jasmine and Esmeralda and saves their life. While the rest are distracted, Hercules and Meg find themselves fighting, but Hercules finds he can't kill her (all of the district partners are in love) so he lets her go. (🎶only know ur lover till u let her go🎶...ok I'm done) she meets up with Ariel and Esmeralda and jasmine. Unfortunately, some poisonous fog comes upon them, and jasmine and Esmeralda die, but Ariel and Meg escape to the water. Meanwhile, Hercules tells the rest of the careers that Meg is dead. Right after he says this, a canon sounds, indicating that jasmine and Esmeralda are dead, but the careers believe his story. They've stopped watching the faces in the sky, anyway.
So here's everyone left: 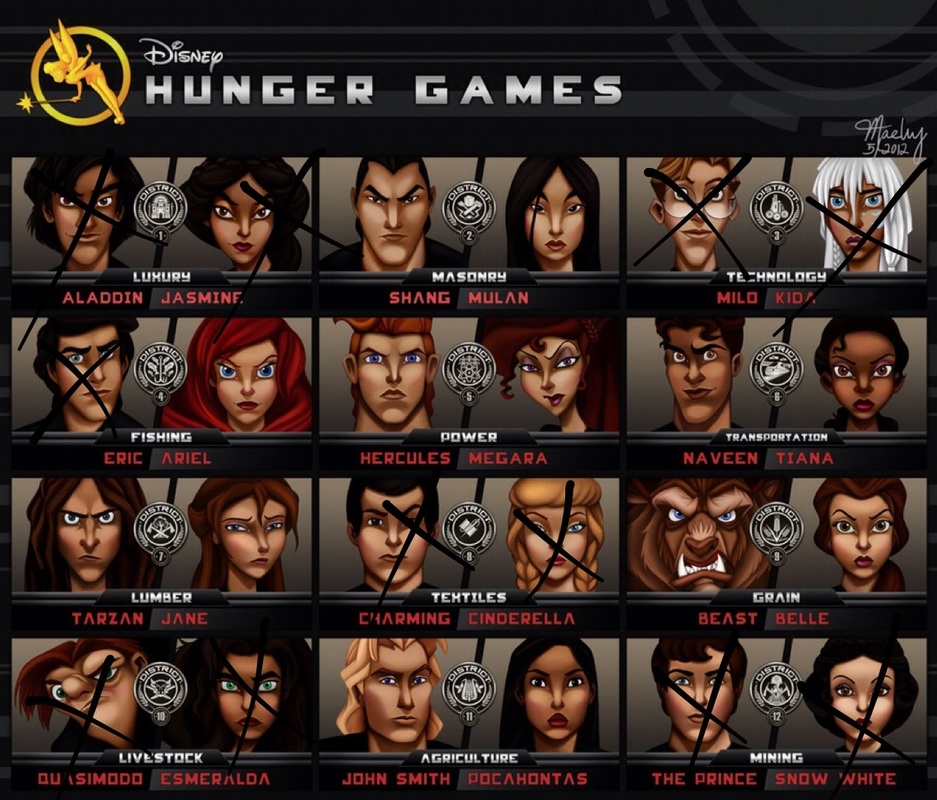 So now you may be wondering, what happened to the other group? The one with Tarzan, Jane, Naveen, Tiana, and Belle? Well they can hunt, and the careers haven't targeted them yet (weakest first, they think, which i think is a bad strategy, but idk ) so everything's okay. However, Naveen has grown tired of the alliance, so he takes Tarzan hunting, and when he's not looking, slits his throat. (Ouch.) Just as the cannon fires, Naveen hears a scream and rushes back to camp, finding the careers have attacked from behind the girls (Jane, Belle, and Tiana.) Shang kills Jane, and Hercules kills Naveen, and the Beast is about to kill Belle, but he suddenly has a flashback to everyone he had killed (Milo and Charming) and now is about to kill belle, the love of his life. He believes he has become a monster, and before anyone can do anything, he takes his sword and kills himself (ok, I have a flair for the dramatic.) Before anyone can react, belle pulls out a bow (surprise, she's amazing at shooting) and kills Mulan with an arrow to the head. They have to run, though, because Shang is flipping mad and they're hopelessly outnumbered, they have to run for a long time, and dive in the water to find Ariel and Meg, Ariel keeping Meg alive underwater, and they swim to the other side of the arena. Darkness is falling, so the careers don't pursue them, however Tiana is tired and dehydrated and dies soon after. After they're safe, belle comes back and has a short memorial for the Beast (tear)
Now there's only 7 left: 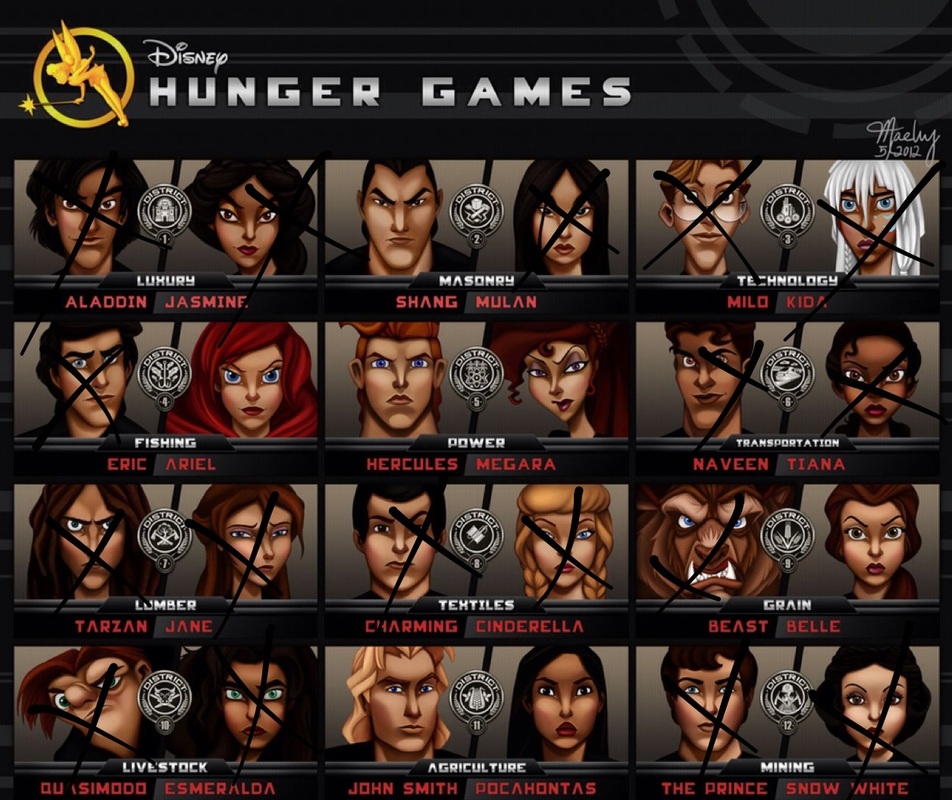 And as darkness falls, horrors come from the forest. Jabber jays fly out where Belle, Meg, and Ariel are, and Ariel hears the screams of Eric, her father, her dead mother, even her sisters. Belle hears the Beast and her father. Meg hears Hercules, and trys to remain indifferent, but eventually succumbs to the screams. Meanwhile, a pack of mutts come after the careers, and they climb trees to try to get away, but there's a white one with blue eyes (kida), a black one with green eyes (Esmeralda) a black one with blue eyes (Eric) and so on, 16 of them, so overpowering that Pocahontas falls off a tree and dies, torn apart by the mutts.
When the morning comes, the mutts go away and so do the jabber jays. Now it's Shang, Hercules, and John Smith against Ariel, Meg, and Belle. Not only are Ariel, Meg, and Belle, hopelessly strength overpowered, they are also mentally exhausted having had to listen to the screams of their loved ones for 12 hours, not to mention physically exhausted. Also, Meg is weak from being kept underneath the water for such a long time. There's nothing to do but wait. Belle kills Shang from in a tree, hitting him with a arrow. But still, the odds are NOT in their favor.
John smith comes and Ariel and Belle rush at him, but he kills both of them. But Meg slits his throat, as revenge.
So now it's only Meg and Hercules. He can kill her easily, because she's food deprived and dehydrated and exhausted, but he doesn't. He offers to kill himself, because he's a hero (ugh) but she refuses. They refuse to kill each other. So the game makers send mutts after them. Jasmine-mutt, Aladdin-mutt and so on chase after them and Meg keeps on falling., and the mutts almost there, so Hercules sacrifices himself and purposely throws himself into a fight with the mutts, and they kill him, so Meg is the victor.
However, there's a happily ever after! Nobody really died, but nothing will be the same. For the Disney characters will remember John Smith and Shangs ruthlessness, Snow White and cinderellas weakness, Esmeralda abandoning Quasimodo, Hercules and Meg refusing to kill each other, Beasts repentance, Ariel and belle hearing the screams of their loved ones, and belle and jasmines memorials to their district partners. Even though no one died, that arena had left a mark on everyone.
The End 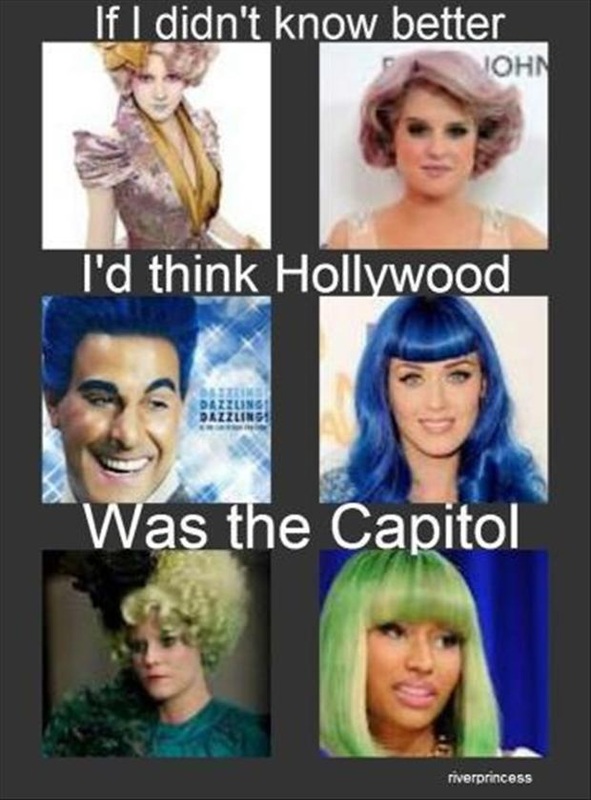 Before the Hunger games, a tribute was a acknowledgment to a person, an arena was for bulls and rodeo, the Capitol was Washington DC, a cornucopia was thingy filled with food and "the Games" were games.
After the Hunger Games, our lives changed and so did our life style.

A kid was attending lunch and another kid dropped something on the table. The kid shouted "THATS MAHOGANY". This kid received a detention for this.

What I thought the Hunger Games was before I read the books: "Im hungrier than you" "There's only one way to settle this" "HUNGER GAMES"
After: the Hunger Games is a book based in a post-apocolyptic world about an independent teenage girl who is forced by the Capitol ion an arena with 24 kids between the ages 12 and 18 to fight to the death until a lone victor remains.
VERY DIFFERENT!